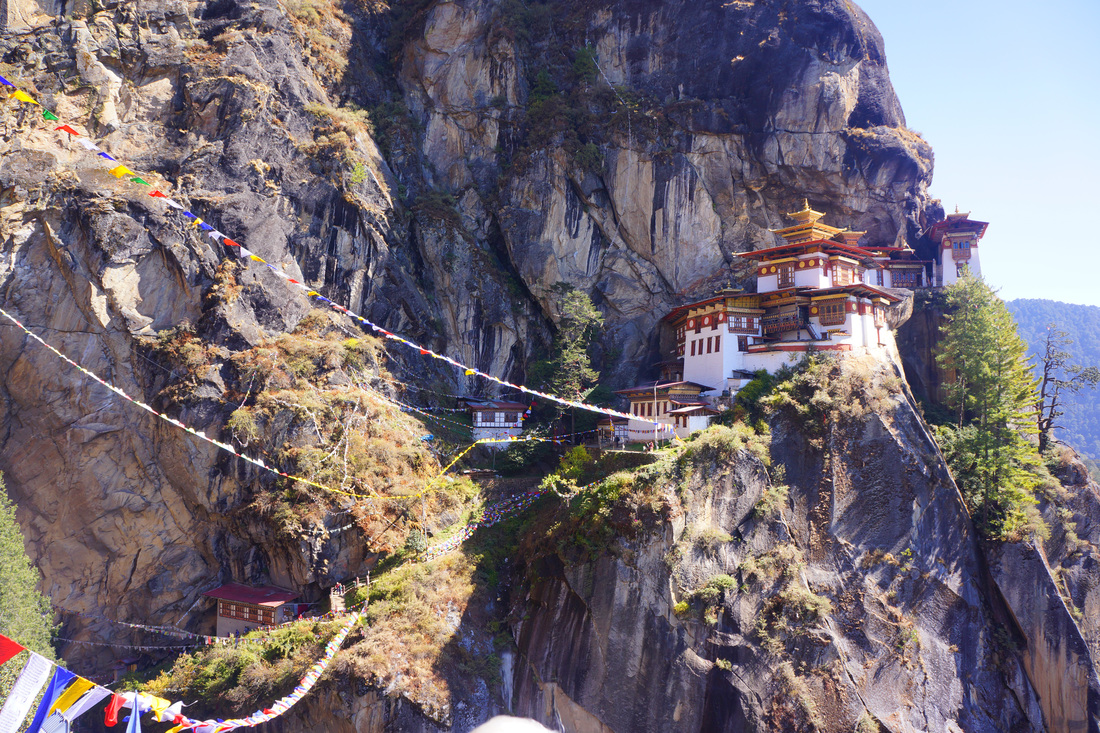 Immerse yourself in the cultures of Bhutan and Nepal, visiting Tiger's Nest Monastery, visiting a local farmhouse and taking a rickshaw to Durbar Square and Teleju Temple.
A&K Advantages
Itinerary
Day 1: Arrive Delhi, India
Arrive in Delhi, where you are met and transferred to your airport hotel.
JW Marriott
​
Day 2: Paro, Bhutan/Thimphu | Welcome to Bhutan
Fly to Paro and receive a tashi khaddia (traditional welcome). In Thimphu, visit the National Memorial Chorten, designed in the style of a classical stupa, with a pyramidal pillar crowned by a crescent moon and sun. Later, see Tashichho Dzong, a 13th-century Buddhist monastery and fort.
Taj Tashi   |   Meals: B

Day 3: Thimphu
Fine Weavers at WorkSee the Folk Heritage Museum, which offers insight into the lifestyle, items and artifacts of Bhutanese villages as well as life in rural households. Proceed to the National Textile Museum, which displays antique textile artifacts of Bhutan, and view an expansive collection of Buddhist literature at the National Library. Enjoy an evening walking tour of Thimpu.
Taj Tashi   |   Meals: B

Day 4: Punakha
The Divine MadmanDrive over the Dochula Pass at an altitude of 10,500 feet, seeing the colorful prayer flags en route to Punakha. Stop at Punakha Dzong, situated at the confluence of the Pho Chhu (father) and Mo Chhu (mother) rivers in the Punakha-Wangdue valley. Continue to the yellow-roofed Chimi Lhakhang (Temple of the Divine Madman), built in 1499 by the cousin of Lama Drukpa Kunley; it was constructed in his honor after the lama subdued the demoness of the nearby Dochu La with his “magic thunderbolt of wisdom.” Return to Thimphu.
Taj Tashi   |   Meals: B

Day 5: Paro
Monasteries, Rivers and RelicsDrive to Chuzom en route to Paro. This afternoon, see the religious thankga(scroll) paintings and the natural history collection at the National Museum. Continue to Rinpung Dzong, a monastery and fortress along a mountain river. It houses the district Monastic Body and government administrative offices of Paro Dzongkhag. Then, visit a traditional farmhouse to learn about local farmers’ way of life.
Zhiwa Ling Hotel   |   Meals: B

Day 7: Kathmandu, Nepal
World’s Oldest ShrineFly to Kathmandu, where you ride by rickshaw to Durbar Square and Taleju Temple, see the House of the Living Goddess (Kumari) and stroll through the labyrinth bazaar and old city. Then, visit the hilltop shrine known as Swayambhunath. Dating to 640 BCE, it is one of the oldest religious sites in Nepal.
Dwarika's Hotel, Kathmandu   |   Meals: B

Day 8: Kathmandu
Nepalese Cooking LessonHead out to the ancient Newari town of Kirtipur, located on a hill overlooking the Kathmandu Valley. Visit the temple of Adinath and Chilancho Stupa. Attend a Nepalese cooking class in a local home. Then, visit Patan, Durbar Square, the Golden Temple and Krishna Mandir. Continue with a stop at Patan Museum, which contains metalwork sculptures of Hindu and Buddhist deities spanning much of Nepal’s history.
Dwarika's Hotel, Kathmandu   |   Meals: B

Day 9-10 Bharatpur
Elephant-Back SafariFly to Bharatpur, the third of the medieval city-states in the Kathmandu Valley. After settling in, set out on an elephant-back safari. The following day, view wildlife, hike and take a nature walk with trained guides. Later, canoe down the Rapti River, and watch the sunset while enjoying a sundowner along the banks.
Barahi Jungle Lodge   |   Meals: B L D

Days 11-12: Kathmandu
Temples and Trade RoutesFly to Kathmandu and enjoy time at leisure this afternoon. The next day, visit Kopan Nunnery to witness a spirited debate amongst nuns. Next, travel to Boudhanath, site of one of the world’s largest Buddhist shrines. Continue to the Hindu Temple of Pashupatinath to meet a local artisan. Next, pay a visit to the royal city of Bhaktapur, a 9th-century fortified town that is home to medieval art and architecthure.
Dwarika's Hotel, Kathmandu   |   Meals: B